The Sondheim Review: No guarantee of happiness

The destructive potential of the American Dream

Originally published in The Sondheim Review. 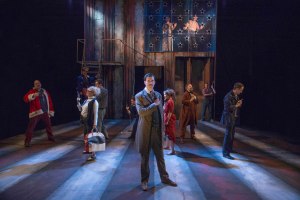 Stephen Sondheim has distanced himself from the practice of reusing discarded songs from old shows when writing new pieces. He has only ever acknowledged dipping into his trunk twice, both for Wise Guys: “Addison’s Trip,” present from the first reading in 1998, and “It’s In Your Hands Now” from the 1999 workshop. What distinguishes these from one another is that while “Addison’s Trip” reused material from an unknown song from a dead project (“Lunch” from Singing Out Loud), “It’s In Your Hands Now” came from Assassins.

It makes sense that if two shows were to share music, it would be the two written with John Weidman about the destructive potential of the American Dream. Even to the untrained ear, “It’s In Your Hands Now” sounds like Americana, with a melody based on the tones of a bugle call and a lyric about the “land of opportunity.” According to Look, I Made a Hat, “It’s In Your Hands Now” is based on “Flag Song,” an abandoned opening number for Assassins that focused on regular Americans before introducing the titular killers. But if you’re reading The Sondheim Review, chances are the first time you heard “It’s In Your Hands Now,” your subconscious started singing along with a different set of lyrics: “I just heard / On the news / Where the mailman won the lottery.”

It’s not uncommon for material from cut numbers to remain as musical references elsewhere in a score: Sondheim famously built “Rose’s Turn” from the castoff “Momma’s Talkin’ Soft.” But it seems unthinkable that Sondheim would use material from a cut number in its show of origin and then fish the same number out of his trunk for a later show unless he was confident the inevitable link many audience members will make might serve the material.

Regardless of whether the link was intentional, it’s worth exploring what might be gained by considering the two works together. In 1991, John Weidman wrote, “we live in a country whose most cherished national myths… encourage us to believe that in America our dreams not only can come true, but should come true, and that if they don’t someone or something is to blame.” Where that blame is directed and how it is handled forms the paper-thin line separating the assassins from the rest of us.

How to represent the rest of us in Assassins was a question that plagued the writers throughout the entire original production, and “Flag Song” was one attempt at an answer. Taking place on the sidelines of a presidential motorcade, the song directly reflects the ambivalence many Americans feel about the American Dream, with lyrics like “You can snipe / At the greed / At the need / To be a winner.” Then antidote to disillusionment comes: “That flag goes by,” causing ensemble to wax poetic about the big (but unspecified) idea America represents.

“Flag Song” came across as “soft” according to Playwrights Horizons artistic director André Bishop, although to my ear the problem is more that its deeply ambivalent message is unsuitable for the show’s opening. The writers eventually solved their problem by adding “Something Just Broke” to the show’s eleven o’clock spot for the 1992 London premiere. “Something Just Broke” is based on the same bugle-call notes that gave “Flag Song” its patriotic motif, and it too balances disillusionment (“As a president he isn’t worth a lot / He’s the kind that gets elected, then forgot”) with a sense of belonging to something bigger (“bringing us all together / If only for a moment”).

Those same bugle-call notes also introduce the remnant of “Flag Song” that persists within “Another National Anthem.” This section too represents the American Dreams of the regular Joes of the country, whom the assassins reject as exceptions that prove the rule. So when Papa Mizner’s deathbed lesson to his sons in Wise Guys (and later, Road Show) is set to the identical tune, our musical subconscious is primed to hear his message through this filter: he’s selling his boys and American dream that is all fantasy, and worse, that can push the wrong dreamer over the edge.

“It’s In Your Hands Now” provides both the inciting incident and the tragic irony of his boys’ lives, which unfolds in a way that can best be described as “out of hand.” Unlike Assassins’ Balladeer taunting the killers with stories of those whose dreams came true, Papa is tempting his children with a vision of where dreams might take them. But we can’t erase the echo of taunting irrevocably attached to this melody in our mind. Our knowledge of Assassins underlines the threat hidden in Papa’s inspirational vision.

Returning to Assassins once we’ve integrated Road Show into our canonical knowledge of Sondheim, we understand something new about the mailman who won the lottery and the usherette who became a rock star: we now suspect that their stories, like that of the Mizner brothers, might not have ended with their windfalls. After all, the Mizners had several big successes, but each was followed by a collapse. This is what the assassins never understand about the American dream: even achieving it once is no assurance of sustained success. The assassin laments “I deserve a fucking prize,” but Road Show reminds us that a prize—or even a lifetime full of prizes—is no guarantee of happiness.

One thought on “The Sondheim Review: No guarantee of happiness”