Cabaret offerings prove the strength of the material 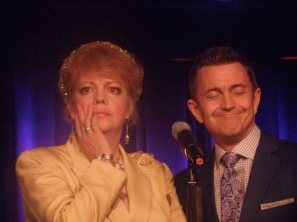 Originally published in The Sondheim Review.

On any given night in New York City there is likely to be at least one cabaret offering some kind of Sondheim program. That leaves intrepid fans to wonder if artists can still show something new at such a performance. Recently, KT Sullivan and Jeff Harnar and Broadway leading lady Alice Ripley took up the challenge.

Harnar and Sullivan’s Another Hundred People at the Laurie Beechman Theatre is billed as “Act Two” of their Sondheim program Our Time, from 2014, but it’s fully satisfying on its own, and in many ways superior to its predecessor. Based on the idea that Sondheim’s lyrics can do the heavy lifting, the performers eschew banter for a song-stuffed program of 18 numbers — 40 songs in all, from Sondheim projects.

Their program is most exciting when numbers take on fresh ideas through new contexts and dialogue with other songs, ably shaped by musical director Jon Weber and director Sondra Lee. Harner’s smarmy take on “I Know Things Now” from Into the Woods in medley with “More” from Dick Tracy turned the song about a young woman reaching maturity into a celebration of a gay man’s discovery of sexual abundance. The duo’s medley of songs about partnership (including the opening number from Wise Guys, the title song from Bounce, plus “It Takes Two” and “Side by Side by Side”) became a mini-musical in itself.

Sullivan possesses the unique mixture of Dorothy Loudon’s animated face and Julie Wilson’s exquisite storytelling ability. Harnar’s ability to flip instantly from arch to earnest lends once-throwaway songs like “Live Alone and Like It” (paired with “You Can Drive A Person Crazy”) a surprising emotional richness. Sullivan gets the lion’s share of more straightforward ballads, but her expressive soprano wrings every once of meaning from them. She gets her laughs in as well, particularly with an outstanding medley of Follies numbers (with one very clever Sunday interpolation).

With so many songs on the agenda, Sullivan and Harnar pull off the impressive feat of hitting many of the classics (“Broadway Baby,” “Children Will Listen,” “Not A Day Goes By”) while still leaving the audience with the impression that the show is largely made up of genuine rarities.

Alice Ripley’s All Sondheim, which debuted at Feinstein’s/54 Below, featured no obscurities. Featuring piano accompaniment by Jessica Means and direction by Jillian Carucci, the show started slow with some awkward banter and too-obvious choices like “Broadway Baby” and “Anyone Can Whistle.” Once Ripley declared her love for the role of Sweeney Todd and unleashed a medley of “No Place Like London” and “The Barber and His Wife,” the evening took a turn for the interesting.

Before long, Ripley confided that she’s entering the “second half” of her career, enabling her to tackle roles she’d been waiting to essay, giving the audience a “Ladies Who Lunch” that should make future Company directors sit up and take note. Even more thrilling was her “Rose’s Turn,” combining the ferocity of Patti LuPone with the glamor of Bernadette Peters into something entirely her own.

Jennifer Damiano, who played Ripley’s daughter in Next to Normal, made a guest appearance to offer a plaintive “Losing My Mind,” looking ready to be the Louise to Ripley’s Rose. Even Ripley’s banter about Damiano claiming a song she might have otherwise sung herself suggested this reteaming is meant to happen.

At times the show bordered on rambling, although as the evening progressed Ripley relaxed, to the benefit of songs and chatter. And if her belty version of “Send in the Clowns” isn’t for everyone, her “Miller’s Son” might be a new standard by which to measure all others.

Despite the title “All Sondheim,” the show was in fact only three-quarters Sondheim, ending with three numbers from Next to Normal, which Alice insisted were obligatory. It was a treat to hear her revisit her Tony Award-winning role, joined by both Damiano and Manuela del Campo, who played Natalie in the Argentinian production of the show. But giving over a quarter of a show called “All Sondheim” to material that is decidedly not Sondheim was somewhat disappointing.

Alice Ripley brought All Sondheim to the Wallis Annenberg Center in Beverly Hills on December 2015. Another Hundred People continueed at the Laurie Beechman in Manhattan through December, with Our Time (aka “Act One”) coming back as well. Harnar and Sullivan will bring Another Hundred People to London’s Crazy Coqs in March, 2016.