The Craptacular: Remedial Queens: More Loesser Than You Can Handle

Originally published on The Craptacular. 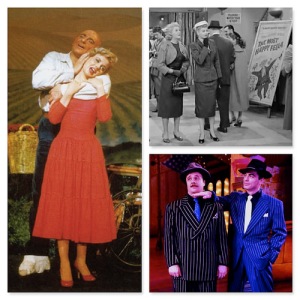 With two of Frank Loesser’s biggest hits returning in the form of simultaneous all-star concerts, last week New York experienced a rare treat for Classic Broadway lovers and the ClaBro-curious alike. Wednesday – Sunday, Encores! gave us the quasi-operatic romance The Most Happy Fella with Laura Benanti, Cheyenne Jackson, Shuler Hensley, Heidi Blickenstaff, Jay Armstong Johnson and… yeah, basically everyone The Craptacular has ever written about. Then, on Thursday, Carnegie Hall exploded with the musical comedy excitement of Guys and Dolls, starring Nathan Lane in the role that made him famous, along with Patrick Wilson, Sierra Boggess, Megan Mullaly, John Treacy Egan, Len Cariou and Judy Kaye.

Frank Loesser was unique among Golden Age songwriters for a number of reasons: his earliest hit songs were written for the movies, marrying his lyrics to tunes by Jule Styne, Hoagie Carmichael, Burton Lane and others. In the mid-1940s, he began writing his own music, leading to his first Broadway show, the hit Where’s Charlie, and his Oscar-winning song “Baby, It’s Cold Outside.” (Please, if you want to debate the perceived rapey-ness of this song, do it in the comments of someone else’s post.) END_OF_DOCUMENT_TOKEN_TO_BE_REPLACED