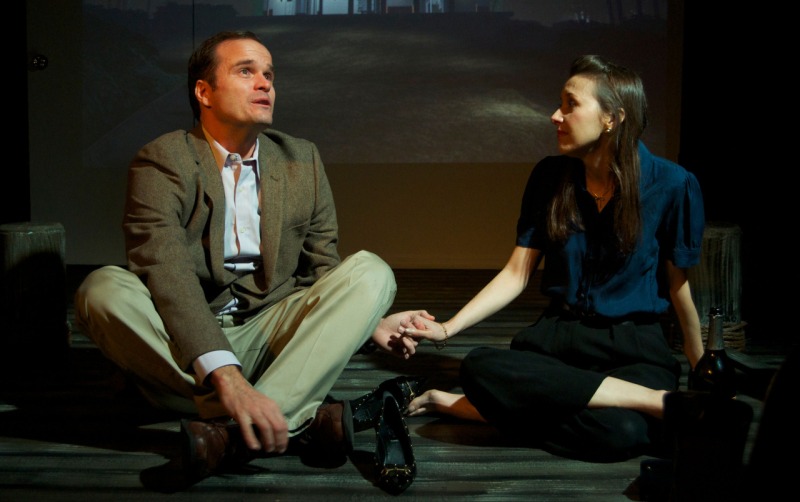 THE PAVILION
(Off-off-Broadway: The Producer’s Club)

You know the story: middle-aged white guy has a mid-life crisis, so attends high school reunion to attempt to rekindle things with his high school sweetheart. In Craig Wright’s The Pavilion, the white guy in question is Peter (Jeffrey Delano Davis), returning to Pine City, MN from his life in the Twin Cities to make amends for impregnating then abandoning Kari (Ayesha Adamo). Their encounter is placed into cosmic context by a professorial narrator (Jon Adam Ross), who alternates between spouting philosophy about the nature of time and giving voice to all the other (unseen) reunion guests.

Michael Kostroff’s direction is strongest in the scenes between the two former-lovers, which find Davis exposing raw vulnerability only to be met by Adamo’s measured resistance. Ross is less successful overcoming his obstacles, often lecturing from a podium far off to the side of the stage or adopting ridiculous character voices while facing the opposite direction of his scene partners. The play’s reliance on a projection design (by Javier Molina) that feels straight out of Myst is unnecessary at best and often distracting. Zoey Russo’s simple but effective sets would have more than sufficed on their own.

The play itself isn’t nearly as profound as its philosophizing monologues indicate it wants to be, but it does feature a nice moment of meta-theatrics in the second act that offered one of the few surprises in the writing.