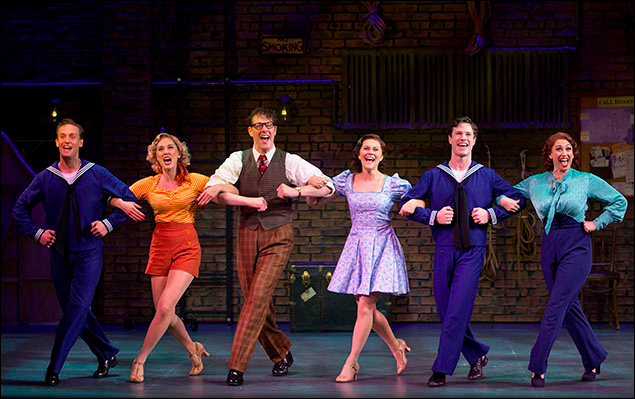 Dames at Sea first delighted audiences in 1966 with its low-budget, can-do spunk. A gentle spoof of 1930s movie musicals, the show prefigured the nostalgia crazy of the 1970s and introduced the world to Bernadette Peters as the ingénue-who-becomes-a-star, Ruby. Now making its Broadway debut, the show’s been gussied up with fancier sets (by Anna Louizos) and costumes (by David C. Woolard) and a major infusion of tap dancing by director/choreographer Randy Skinner, the contemporary master of the form. Can this extra dose of razzmatazz make up for the lost intimacy and proximity to its antecedent? Only intermittently. Eloise Kropp, this production’s Ruby, is a fine singer and dancer, but she lacks “it.” Thankfully, Lesli Margherita as overbearing diva Mona is full of “it,” and she walks away with every scene she’s in. The rest of the tiny cast get the job done, but the show is so light and frothy it leaves little lasting impression. The book and lyrics by George Haimsohn and Robin Miller are heavy on references that will be lost on contemporary audiences and surprisingly light on jokes. Jim Wise’s melodies do the heavy lifting; audiences are sure to hum the tunes for weeks. Some of the show’s old-fashioned features, like the song “Singapore Sue” (despite its uncredited new lyrics) and the decision to cast only white people, might have better been left in the past. Ultimately: a fun but inconsequential diversion of just about two hours, but who wants to pay $155 for that?