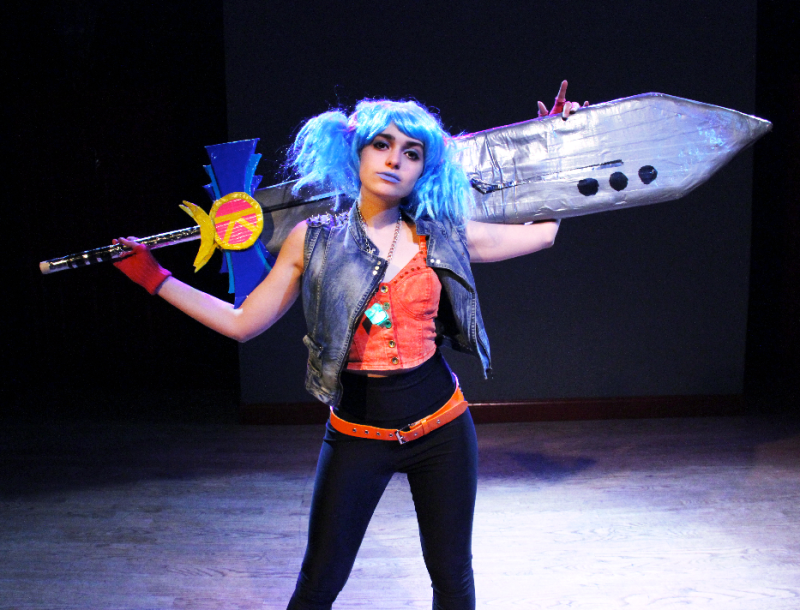 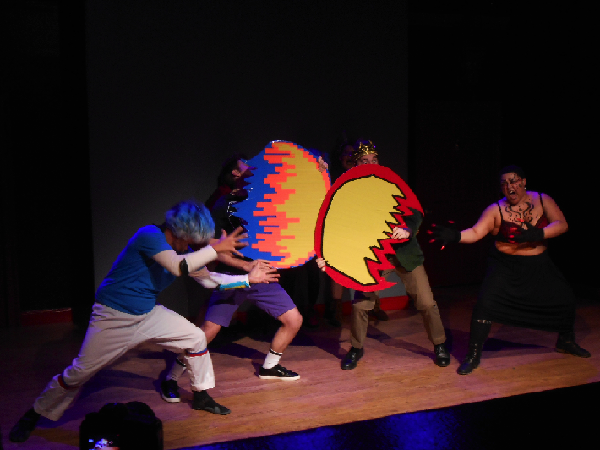 Drawing on the archetypes of both video games and Japanese animation, Kapow-i GoGo introduces the titular heroine (Madeleine Bundy) as an ambitious but immature teenager with her eye on becoming the World’s Greatest Fighter, taking after her heroic but mysteriously absent father. Bundy’s ability to take her character from insolent cartoon to forceful heroine to grim-and-gritty antihero makes her a strong anchor for the rest of the cast. She is soon joined by her annoying brother Hicc-up GoGo (Mike Axelrod, who displays a surprising range by the end of the evening) and enigmatic teacher, the blind, drunken Master Masterwhiskies (Hank Lim) on a quest to find the powerful Hydra Crystals, win the World’s Ultimate Warrior Championship, and maybe learn a little bit about themselves along the way. Of course, being a world-spanning saga, their party encounters villains both humorous (Team Trouble, played by writer Cox and Karsten Otto) and terrifying (the demonic Xar Xar Zuu, played by Cristina Pitter), romantic partners and rivals (in a delightfully queer move, Kapow-i GoGo ends up in a triangle with Eliza Simpson as Princess Cloudberry and Asia Kate Dillon as Blade Gunblade). There’s a lot more that happens – you can fit a hell of a lot of plot into nearly four and a half hours of theater – but suffice it to say that despite many twists and turns, the plot is shockingly coherent and engaging from start to finish. 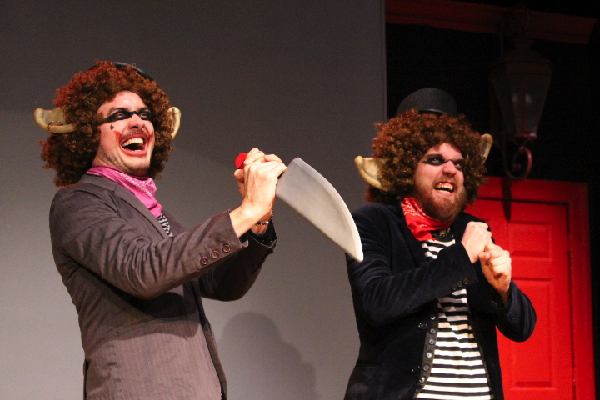 More impressive than the intricate plotting of the evening is the ability of both the writing and performance to never drift into parody, thanks in no small part to swift but sensitive direction by Kristin McCarthy Parker and Joel Soren. There are jokes, for sure, including two particularly hilarious running gags about impassible bushes (the bane of many a gamer) and those relentlessly cheery computer-controlled shopkeepers. But the rest of the characters are three-dimensional people, endowed with emotional depth by a stunningly talented ensemble cast, and with a show this long and complex, every single performer has multiple opportunities to shine. Character deaths hurt, romances thrill, and even the changing alliances of villains late in the game will melt your heart. This level of sophistication will also ensure that audience members who have never played a video game or watched an episode of anime should find much to enjoy. 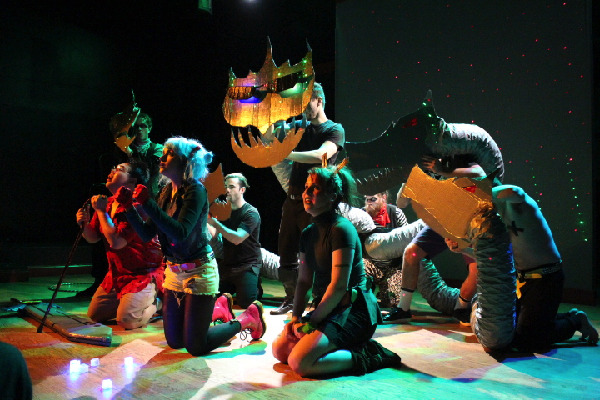 The run at PIT has already been billed as Kapow-i GoGo’s “Extra Life,” and as of this writing the show has earned itself an additional 1-Up with an added marathon on May 24. One can only hope that next Kapow-i GoGo will level-up to an open-ended run somewhere in the city.