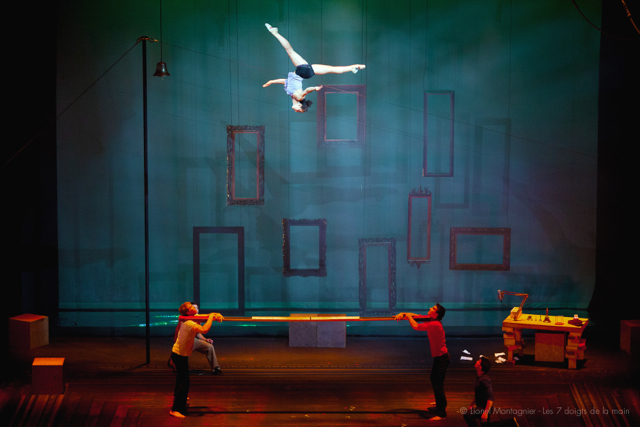 At the intersection of dance and athletics, you might find Séquence 8, the “nouveau cirque spectacular” at City Center through April 26. This show from the Montreal-based troupe Les 7 Doigts De La Main (better known in New York as the circus troupe from Pippin and Traces) feels closer to Mark Morris than Ringling Brothers, presenting eight young performers whose skills combine juggling, acrobatics, dance, and even  a bit of singing, beatboxing, trumpet-playing, and comedy. There is no shortage of talent in this group.

Colin Davis keeps things moving along as the closest thing to an MC this show will allow; at one point he refers to himself as “the one who talks,” although he also sings and plays the aforementioned trumpet in addition to his acrobatic duties. While there isn’t a plot or a through-line, certain themes recur throughout the evening, primary among them the interdependence of individuals and their communities. While most of the performers are afforded solo moments in the spotlight to show off their specialty, such as Eric Bates’s impressive box-juggling and Camille Legris’s gorgeous aerial dance, they are often surrounded and supported by their crew. The result is at times somewhat erotic and sometimes platonic, and men who minutes ago cradled each other tenderly mid-dance might suddenly bro out, complete with chest bumps and grunting noises to celebrate a well-executed move.

Ugo Dario and Maxim Laurin most fully embody the ethos of interdependence with their Korean Board specialty. (Imagine an oversized see-saw catapulting the men high into multiple backflips high above the stage.) When one of the men seemed to fumble a landing, throwing them both off, they seemed to go through a small ritual of reconnecting with each other before remounting the board. The audience response to the fumble was so warm, one wonders if moments such as this are written into show to underline the point. Planned or not, these human moments help make the dance and acrobatics add up to more than just an evening of circus acts, allowing Séquence 8 to live up to its spectacular billing.