Jewschool: Meet the Man Behind The Men of the Naughty Jewish Boys Calendar 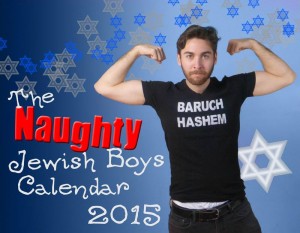 Last February, I shared a link right here on Jewschool to a Craigslist ad advertising for models for a “Naughty Jewish Boys” calendar. I was so tickled by the idea when I saw it on my friend Duncan Pflaster‘s Facebook page, I didn’t even realize that he had posted the ad – or that the Jewschool post would bring it widespread Jewish media attention. Fast forward five months, and the calendar is a real thing that exists in the world in two versions: the regular and extra-naughty editions. I sat down with Duncan this week to chat about his adventures in putting these calendars together.

Naturally, the first thing I wanted to know about was what kind of controversy the calendar had generated. Duncan’s run-ins with the creator of the Nice Jewish Guys calendar have been well documented elsewhere, but I had to know: were religious people offended at the images of nearly-naked men with ritual objects? Were liberals offended at a non-Jewish photographer eroticizing or even fetishizing Jewish men? Nope. “Most everybody has thought it’s been a fantastic idea,” he told me, “Especially the Jewish press.” While he did have a couple of people get upset over eroticizing Judaism, the more common response has been from women saying “it’s incredible. Thank you so much for doing this.” END_OF_DOCUMENT_TOKEN_TO_BE_REPLACED