Jewesses With Attitude: Jackie Hoffman Doesn’t Care If You Find The Feminist Message

Originally posted on Jewesses With Attitude. 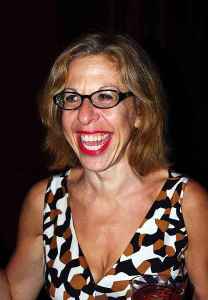 Throughout March, Baruch College Performing Arts Center has been presenting a series of Jewish comediennes in partnership with the Jewish Women’s Archive and Baruch’s Jewish Studies Center called “Solo in the City: Jewish Women, Jewish Stars”. With a mix of well-known names and up-and-comers in the lineup, the series defies the temptation to draw generalizations about funny Jewesses.

Jackie Hoffman, beloved in theatrical circles for her take-no-prisoners approach to musical comedy (sample lyric: “fuck you for asking me to do a show for free! / fuck you and your benefit for charity”), is at once an ideal and a challenging performer for such a series. Undeniably funny and with a deep understanding of Judaism (she’s the black sheep of an Orthodox family), she knows she can draw a typical Jewish audience in with songs criticizing Jewish Buddhists (“Inner peace and joy are overrated / come back to the fold of the most-hated”) and pushy mothers on Manhattan’s Upper West Side. But when her paean to Shavuot includes lines like “Ten Commandments God gave to us so that we won’t sin again / Ten Commandments I break every day by eating pork and Christian men,” you know this isn’t your typical JCC fare.

While the publicity around this series carefully avoided the word “feminism,” I couldn’t help but watch Hoffman’s show and wonder if there was a feminist message to be divined from the woman who counts among her achievements “convincing the Hispanic security guards and bus boys of this city to use condoms” and openly resents the successes of co-stars she deems less deserving.

Jackie Hoffman doesn’t care if you find a feminist message – or any message – in her performances. And that in itself may be the embodiment of a feminist victory.

At 52, Hoffman demonstrates total ownership of her sexuality, and she delights in pushing limits with stories of her one-night stands with men on the lowest socio-economic rungs she could find (prior to her marriage to a younger, non-Jewish jazz musician). She speaks her mind even when it might not win her friends, vocally lamenting having to share the screen (on The New Normal) with an actress whose only previous credit was a Real Housewives show… and who has a bigger part than she does.

Jackie Hoffman fearlessly embraces the contradictions of her own life, telling Jews who’ve embraced Buddhism they should give up the Dao and come back to shul, while simultaneously celebrating her own trip off the derech (away from the “path” of Orthodoxy). Hoffman asserts her feminist credentials simply by taking space and embracing her own agency, with no apologies or explanations. And no matter how funny she is—that is no joke.