Keshet: Keep On Coming Out

In honor of National Coming Out Day, we bring you the coming out musings of David Levy, long-time Keshet member and board member, who explains why he doesn’t think the coming out process is ever over… and why that’s not a bad thing. 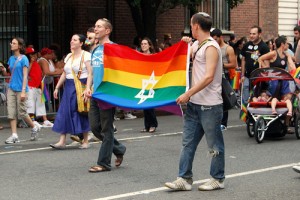 Coming out is such a profound aspect of the LGBT experience for many of us that it’s taken on a special place within queer culture. When I was growing up, coming out stories dominated gay fiction and cinema. Swapping our own stories of coming out is a frequent characteristic of gay dating. But there are two questions that come up in these contexts that always aggravate me:

“How old were you when you came out?” and,

“Don’t you wish we lived in a time when no one had to come out?”

The first question sticks in my craw because coming out is a process that might have a beginning, but it certainly doesn’t have an ending. Every time I meet new people, I am presented with another opportunity to come out. Do I make a pronouncement or work it casually into conversation? Missing the opportunity, even unintentionally, can make me feel shoved back into the closet. That feeling worsens the longer it takes to remedy the situation, as a misconception can turn into at best an awkward situation and at worst a secret you never meant to keep.

I came out to my best friend in high school when I was 15, after I had been messing around with a couple of guys for about a year… But I never talked about gay identity with those guys, so did I come out to them? I told my parents when they dropped me off at college, but it took me until about a month into my sophomore year, when I made a speech at Hillel for National Coming Out Day, to feel like I was really out to the entire community. At my first job, running the business side of a record label devoted to show tunes, it was easy to be out. At my second job, as a youth educator at a suburban Conservative synagogue, I found myself back in the closet, at least when I was on the clock. When I left three years later, I vowed never to take a job that made me feel like I needed to be in the closet again. So did I come out at 14, 15, 18, 19, or 27?

As you might imagine, coming out can be exhausting. Even when you’re absolutely sure whomever you’re talking with won’t react badly to the disclosure that you are whatever it is you are, figuring out how to work it into conversation in a way that doesn’t feel forced but also doesn’t minimize an important aspect of your identity… well, it takes energy. So I can almost sympathize with well-meaning friends and acquaintances who long for a day in which no one needs to come out.

But as exhausting as coming out can be, it’s also important. For me, coming out was like my gay bar mitzvah. No, I didn’t throw a party, receive lots of presents, or memorize any long religious texts (unless you count the lyrics to Follies). But just as bar mitzvah represents the moment Jews take responsibility for their own Judaism, coming out marked the beginning of my own maturity as a gay man.

Accepting that I was gay as a teenager meant I had to take responsibility for my relationships: I could no longer in good conscience use girls to throw people off the scent of my sexual orientation, nor could I behave irresponsibly with boys under some illusion that what we were doing “wasn’t real.”

Asserting that I was gay as a young adult meant I had to take responsibility for the world around me. I could no longer remain silent at social or political injustice… or when someone made insensitive or homophobic remarks.

And remaining proudly out as a gay man enables me to ensure that my point of view and unique experiences aren’t belittled or silenced in the name of the well-meaning but misguided “Aren’t we all alike deep down?” or the more odious “I don’t care what you do in the bedroom, but I don’t want to hear about it.”