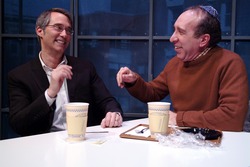 We’ve all heard the platitude “you can never go home again,” but Donald Margulies isn’t listening. In his play Brooklyn Boy, now playing a limited engagement at the SpeakEasy Stage Company, Margulies counters this cliché both in his story and in his setting.

The plot follows newly successful author Eric Weiss as he takes a detour from his book tour to visit his ailing father in the Brooklyn hospital where he himself was born. The return to Brooklyn is also significant for playwright Margulies, whose early successes were all set in Brooklyn, a site he hasn’t written about since 1991’s Sight Unseen. But whether the return is significant to the audience is a somewhat more complicated question. END_OF_DOCUMENT_TOKEN_TO_BE_REPLACED