The Deaf West Theatre production of Big River has been enchanting audiences throughout the country since its initial staging in Los Angeles in 2001, so the production’s current triumph in Boston – the city where the original production of Big River began in 1984 – comes as a surprise to no one.  Sure, there are quibbles to be had with this production:  the contrapuntal sections of the opening number are gone, as is Tom Sawyer’s big solo, “Hand for the Hog”; the production is really too intimate to play a gigantic house like the Wang; most egregiously, the Wang’s notoriously horrible sound system makes everyone sound pre-recorded, although in a production where half of the performers’ voices are provided by actors across the stage, perhaps this effect puts everyone on equal footing.  Quibbles aside, the result is a stirring example of musical theatre at its best.

On a more personal note, I was excited to see Big River‘s return to Boston, because the show’s visit here on her first national tour back in 1986 was my very first trip to see a musical outside of community theatre.  And I was similarly excited to see that much has been done to ensure this production of Big River was similarly suited to serve as an introduction to the theatre for a new generation of youngsters.  Much has been made of the generosity of the Carl and Ruth Shapiro Foundation, which has provided a grant to fund the accessibility programs and activities for the tour’s Boston stop, as well as the anonymous donations which have cut ticket prices in half for the entire Boston run.  Let’s hope they start a trend.  There’s a lot more being done in the realm of community outreach by the Wang for this production that also deserves note, namely, their new Family Series.

The Wang Center Family Series, also known as “Artopolis,” kicks off with Big River and continues on with A Year with Frog and Toad, The Little Prince, and Cirque Dreams.  The series brings with it more than a “package discount” for families.  It’s been well-designed to address the needs of theatre-going families.  In addition to the expected performance guides (more on that in a moment), the program is offering kid-friendly talk backs, family-oriented pre-show parties (“so you don’t have to worry about feeding the family between soccer games and curtain times,” to quote their website), backstage tours and more.  Participation in Artopolis does require a $50 “membership,” and while it’s unclear whether those who’ve missed the first production of the season will have the opportunity to join the season-in-progress (and good luck getting a human being on the phone), it’s certainly worth pursuing.

Now, about those performance guides.  If the Big River guide is any indication, this is a series to collect and save.  The twenty-page booklet, prepared by Laura Dougherty on behalf of the Suskind Young at Arts program, goes far beyond the expected plot summery and vocabulary list.  Nearly every page features a “Try This!” sidebar, encouraging young theatergoers to go deeper into issues raised by the play, from the point of dual casting to the influence of American artists on the production design.  Talkin’ Broadway readers will be particularly happy to know there’s an entire page on theatre etiquette, including the best-worded encouragement not to speak during the performance that I’ve ever read.  There’s even an entire page entitled “After The Show” encouraging readers to learn more by visiting a library for books by and about Mark Twain, learning more about Deaf West, or even visiting this very website (although an unfortunate typographical error in our address may prevent too many new readers from following through on that suggestion).  This guide was based on a “Discovery Journal” produced by the Los Angeles organization Performing for Los Angeles Youth (PLAY), and I suspect similar resources will be available at other stops on the tour.  Whether you are a kid, have a kid, or once were a kid, I highly recommend asking an usher to find you one at whatever stop you catch the tour. 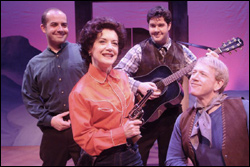 Do you ever go to the theatre and find yourself entertained, but feeling like something is missing from the experience? Get ready for that old familiar feeling once more, as The SpeakEasy Stage Company presents the New England premiere of last season’s Off-Broadway musical adaptation of the 1950s camp western filmJohnny Guitar. The play, a 2004 Outer Critics Circle Award winner, offers laughs, social commentary and a pleasant score. The script by Nicholas van Hoogstaten is solid, filled with laughs and just as relevant in today’s world of the Patriot Act as the novel and film were in the days of the House Un-American Affairs Committee. All it needs now is a reason for singing.

There’s nothing particularly wrong with the songs of Johnny Guitar. There’s just no particular reason for them to be attached to the play. With few exceptions, the songs feel like filler. Many of the songs, which have music by Martin Silvestri and Joel Higgins, with lyrics by Higgins, are first class filler, from the opening number that perfectly captures the style of a 1950s film title song, to the sweetly reflective first act closer, “Welcome Home.” But that doesn’t change the fact that when I wanted to write something nice about the song “In Old Santa Fe,” a lovely ballad from the middle of the first act, I couldn’t find the words to describe the song’s function in the show – because it doesn’t have one. Music Director José Delgado should be commended, however, for making the most out of slight material. The four-piece band perfectly captures the feel of both country western and 1950s doo-wop, and the singers do their best to make up for the lack of relevancy with considerable panache.

If a handful of extraneous (but by no means offensive) songs don’t bother you, there’s a lot to like about the show, particularly in the SpeakEasy’s production, wittily directed by the company’s Producing Artistic Director, Paul Daigneault. The cast is first rate, with particularly sterling performances from Kathy St. George as Vienna, the role originated by Joan Crawford in the film, and Margaret Ann Brady as her nemesis, Emma Small, the Mercedes McCambridge part. St. George perfectly embodies the power and self-consciousness of the saloon owner without belittling the character’s truth beneath the camp. Brady gives in to histrionics as she cackles her way through the show, but as the arch-villain of the piece, she’s allowed. The men are all capable, if a bit interchangeable. Christopher Chew’s Johnny Guitar isn’t so different from his rival for Vienna’s affection, The Dancin’ Kid (Timothy J. Smith), but the show, like the film before it, isn’t really about the men. The supporting cast turn in fine performances, particularly the trio of Christopher Cook, Luke Hawkins, and Drew Poling, who function as a Sons of the Pioneers style back-up group in many of the songs in addition to playing a multitude of supporting characters on both sides of the Vienna/Emma rivalry.

There are clever (and appropriately campy) stage effects, from a tumbling tumbleweed that opens the show to a chandelier that has a couple of tricks on hand. The set, designed by Caleb Wertenbaker, is just cartoonish enough to remind us not to take anything too seriously without looking silly. The costumes, designed by Gail Astrid Buckley, are never quite as fun as the rest of the production, but often mirror the look of the film and certainly serve their purpose. The lighting by James Milkey is somewhat more problematic, often leaving supporting characters or back-up singers in the dark, and trying unsuccessfully to substitute three static spotlights for a much-needed follow spot in the opening number, leaving the lead singer crossing through darkness in the middle of lines. Similarly, the sound design (by Briand Parenteau, with effects by Laura Grace Brown) is uneven, particularly when the lead singers are backed by the vocal trio, and everyone is over-amplified. In a theatre the size of the Roberts, these singers could certainly handle this score without any microphones, and hopefully, as the SpeakEasy gets more used to performing there, unamplified voices will become the trend.

Johnny Guitar in the Nancy and Edward Roberts Studio Theatre in the Stanford Calderwood Pavilion at the Boston Center for the Arts, 527 Tremont St in Boston now through December 18th. Wednesday – Saturday at 8:00pm; Saturdays at 4 pm; Sundays at 3 pm. Tickets range from $30 to $40; $20 student rush available with valid college ID, at the box-office only, one hour before curtain, subject to availability. For tickets or information, call the Box Office at 617-933-8600 or visit the Calderwood Pavilion box office, 527 Tremont St. or visit one of these websites: www.speakeasystage.com or www.bostontheatrescene.com.
Photo: Craig Bailey/Perspective Photo