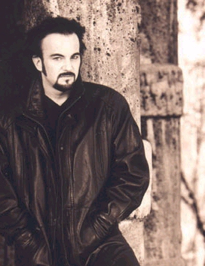 Kenneth Posey, the current star of Jekyll and Hyde in Germany, recently released an album called If I Sing, which we’re offering for sale on the Fynsworth Alley web site under special arrangement. Before joining Jekyll, Kenneth performed in Phantom of the Opera, Beauty and the Beast, several other musicals and a plethora of operas. To find out more about him, visit http://www.kennethposey.de, his official web site. Or just read on…

DL: So, I’m sure the first question you always get asked is how a guy from Houston ended up as a staple of German musical theatre. What’s your story?

KP: Shortly after graduating from high school, I left Houston to train as an opera singer. After chasing every teacher, every school, every chance – I ended up in Boston. Ironically, a result of my education was the realization that making a living as an opera singer in the US was almost impossible: too few opera houses and too many singers. It was 1990. The Berlin Wall had just come down, Germany was still in two parts but talking reunification, and I decided to go. I immediately got a job in a small opera house in eastern Germany where I guess you could say I completed my education – over 30 roles in three years! I then worked my way into the mainstream of the German opera world and spent a couple of years singing non-stop but living mainly in hotels. When a call came, inviting me to Switzerland for a new production of Phantom of the Opera – 13 months of living in one beautiful city – I accepted it without a thought. One Phantom led to another (Hamburg) then came another new production (Disney’s Beauty and the Beast) followed immediately by Jekyll & Hyde. Ten years after leaving the US, I’m still here and having a great time!   END_OF_DOCUMENT_TOKEN_TO_BE_REPLACED