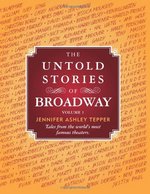 History, as we all learned from Stephen Sondheim’s “Someone in a Tree,” is shaped as much by the storytellers as it is by the story. Herein lies both the charm and the challenge of The Untold Stories of Broadway by Jennifer Ashley Tepper, the first in a projected four volumes of “tales from the world’s most famous theaters.” Tepper, armed with little more than a tape recorder and chutzpah, interviewed over 200 Broadway professionals, including actors, writers, musicians, designers, stagehands, producers, ushers and doormen, to create this oral history of Broadway organized by theater.

For those unfamiliar with Ms. Tepper, she is the 28-year-old director of programming at 54 Below, and the Millennial most likely to be dubbed Mayor of Broadway when it’s time for that title to pass to her generation. Between assisting Michael Berresse on the Broadway production of [title of show], working for Davenport Theatricals on shows such as Godspell and Macbeth, and producing a variety of beloved concert series including If It Only Even Runs A Minute (celebrating Broadway’s flops), Once Upon a Time in New York City (featuring new songs by Broadway composers reflecting on their relationship with the city), and the Joe Iconis & Family shows, it seems like Jennifer is everywhere and knows everybody.  END_OF_DOCUMENT_TOKEN_TO_BE_REPLACED